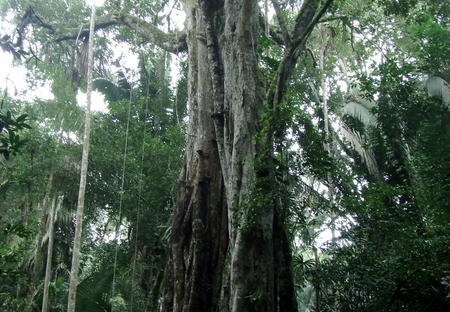 Walking through the veil of the structure was scary, especially with the deaths of Seun and Kunle still on my mind. Sogo looked lost and haunted, and I think I understood a bit of what he was feeling. He had promised to protect me and the others. And yet, he had lost three of his younger brothers.

Once we passed the dark shroud covering the door of the structure, we entered a large place. So large, in fact, that I couldn’t see the roof. Instead, looking up showed me the night sky which didn’t make sense. It was sunny outside and yet, I could see the stars in the sky.

The shaman ordered us to stop then, before counting us. I counted along with her and stifled a sniff when I realized we had been cut down to just twenty. We went from fifty to twenty in just about a week. I could hear the girls in the group start to cry softly as it sunk in. Sogo’s eyes were red but he didn’t cry.

When the shaman was done counting for herself, she told us to sit on the floor by the entrance before she disappeared down a corridor to the right of the entrance. We sat quietly even as a heavier burden rested on us. Some of the boys and girls cried while the rest just remained silent.

I thought I would cry. I hoped I would cry. But I didn’t. I just watched and waited and silently prayed for when we would return back to our parents.

The shaman returned after a few minutes, dragging a long wooden platform on stone wheels. On the wood, was a large drum that gave off sounds of something swishing inside it. Next to the drum was a bag that shook and squirmed.

She stopped the wooden platform in front of us before walking to stand in between us and the items she brought.

“Behind me,” she began in a wheezing voice that never rose higher than a loud whisper, “is water for your thirst and food for your bellies. But I must warn you…”

The mention of food made everyone’s stomach protest but her warning tone quieted us as quickly. She moved forward towards us and brought a finger to her lips.

“You must all be careful now,” she said.

“Where are we, ma?” a small girl, younger than me asked.

“We are away from the world, Ajoke. We have come to ask the mighty Ogun for help,” the shaman answered.

“Will he listen?” Sogo asked, his voice cold and edging on dangerous.

I saw the grip on his warrior blade tighten and I touched his knees before glancing back at the shaman. Her eyes fixed intently on him and a cruel smile formed on her lips as she pointed at my brother.

“Remove the hatred in your heart, Sogo or you will die before the day is finished,” she said to him.

My brother frowned for a moment before relaxing the grip on his sword. His look of defiance didn’t soften. Instead, I saw his stubborn face harden. Her smile widened and I worried she was going to kill him immediately but she laughed instead. A frightening guttural laugh echoed in the structure we were in.

She walked to the platform and opened the drum of water. She cupped her hand and took a sip from it before turning to face us.

“Whatever you do in this space, remember… The gods are not your fathers or mothers. They do not like you, nor do they care for you. Worship them as you have and perhaps you will see your family again.”

After that, her hands shot up above her head and she screamed in a loud shrill voice that shook the air and made my heart beat fast. There was a ripping sound, like someone’s cloth was being torn and in that instant, the shaman was gone.

For a moment, we all stood in without a sound as the darkness around us seemed to dim as if it was creeping closer to us. And then, Sogo ran forward towards the drum, dragging me by the hand. He put his face into the drum, followed by the waterskin he carried by the side. Then he pushed my head into the drum too before I was pushed away by the other children.

Soon enough, all twenty children were running forward towards the drum to drink some water while I tried to catch my breath. As I sputtered and gasped, the bag next to the drum squirmed again and the binding at the mouth of the sack came loose.

Suddenly, soft white fluffy animals shot out and began hopping away from us in speed. Sogo was already up by now, chasing one of the animals down a strange corridor. I rushed to my feet and raced after him. By the time I caught up with him, he had the animal by its long ears and he smiled tiredly at me.

“Look, Jide… We have some food!” he said in excitement before breaking into a short laugh.

I smiled back at him widely, before glancing back to see if the others were lucky in their chases. Except there was nothing to see behind us. The laugh died on his face as we both stared down a long empty corridor that got increasingly dark the farther it went.

A sound traveled down the corridor, something akin to a roar and I shivered from top to bottom.

Sogo put his hand on my shoulder and pulled me back slowly to stand behind him.

“When I say so, start running okay?” he whispered.

The sound repeated itself, louder this time and the air in front of us shook like it was a cloth in the wind. I shook with it, relieving myself without meaning to. Sogo pushed me faster behind him. He grabbed my hand and spoke quickly.

“Start running,” he said and we began running down the corridor.

As we ran, I could hear the sound of something chasing us from behind but I didn’t stop. I couldn’t stop. Sogo kept pulling me ahead shouting that I keep running. And I kept running.

But we couldn’t outrun whatever was chasing us. If anything, the sounds and roars behind us were getting louder.

Suddenly, there was a small opening ahead of us. A small space was carved into the wall of the corridor. Sogo stopped as soon as we got close, pulling me as I tried to keep running ahead. He pushed me into the space and removed the waterskin from his shoulder before handing it to me.

Then, with a brutality I didn’t know my brother had, he broke the neck of the animal he had been carrying before handing the animal over to me.

“Wait here, Jide. I can’t fight and protect you at the same time. Hide here. I will kill the monster chasing us and come back for you,” Sogo said.

“No. Don’t go. Please stay,” I protested but he shook his head hastily.

“Jide. I’ll be fine. I promised to protect you. Be quiet. I’ll be quick,” he said before running his hand through my hair and disappearing from my sight.

“Whatever you do in this space, remember… The gods are not your fathers or mothers. They do not like you, nor do they care for you. Worship them as you have and perhaps you will see your family again.”

I looked at the dead animal next to me and it occurred to me that I wasn’t hungry. That I hadn’t been hungry since my brothers were drowned and killed in the river. I remembered the mahogany tree back home. And I remembered how much the structure had reminded me of the tree.

Slowly, I dragged the body of the animal and laid it in front of me. I removed the small sky rock blade my father gave to me for my main day and positioned the tip just above the breast of the animal.

I remembered what the shaman did during such sacrificial rituals and figured I could try and do the same. I figured, if I could play the shaman in my childhood games then maybe I can do it for real.

The black blade pierced into the animal smoothly and the red color of life burst out of its body, splashing on my face and my lips. A warmth enveloped my hands as the blade sunk deeper and I found myself trying to breathe. I thought my hand would shake at the taking of life but it was steady.

I removed the blade and sunk it deeper before using the sharp side to widen the cut in the animal. Just like the shaman would do, I removed all I could from the inside of the animal and laid it in front of me.

Then, I changed my position to kneel.

“Ogun, of might and iron, please accept this sacrifice from your servant,” I whispered in a level voice.

I didn’t know what to expect but I bowed my head with my hands outstretched towards the entrance of the small space.

Then I continued waiting.

Interviews with the characters of your favourite books

International Microfiction in 100 Words or Less

Grab a warm drink, a book, and read with me.

None of that semi skimmed stuff...

A Flutter of Pages

A place for book reviews and bookish thoughts

Book Reviews by Emma b Books

The Home of Alex Raizman

Author of the Small Worlds series

Writing by Inorai
Land Of Misfits

Words of my mouth, meditations of my heart....